Today’s post presents a personal reminiscence story in Jiwarli with English translation, told to me by Jack Butler on 3rd November 1983 and explained on 16th May 1984. There is information about the Jiwarli spelling here.

This story is about jiribarri Echidna (Tachyglossus aculeatus), a spiny ant-eating monotreme. When disturbed, Echidna curls up into a ball, using its spines to protect itself. Echidnas were traditionally hunted for food, and Jack explains that if they found an Echidna the old people would talk to it, and tell it to uncurl so that they could give it chest cicatrices. These are scars cut across the chest of initiated men as a sign of knowledge. Notice that there is a story similar to this Jiwarli one called Text 18 “Anteater’s Law” on pages 53-56 of Carl Georg von Brandenstein. 1970. Narratives from the North-West of Western Australia in the Ngarluma and Jindjiparndi Languages. (Australian Aboriginal Studies, 35) Canberra: Australian Institute of Aboriginal Studies. 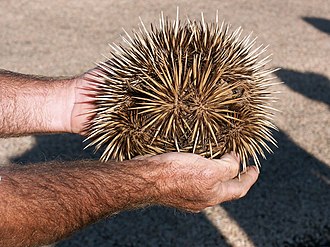 The knowledgeable grey-haired old men used to see Echidna going along. Echidna would curl up now. He would lie curled up and you can’t see his head. The old men used to turn him over onto his back so he would lie there curled up. They would say: “Lie on your back. I’ll get you cicatrices. I’ll get you cicatrices”. They would tell him lies now. Echidna would open up and lie on his back pleased. He would lie on his back and then they would hit him on the head with a stick, and kill him to go and eat the meat.