Today’s post presents another story in Jiwarli with English translation, told to me by Jack Butler on 3rd November 1983 and explained on 18th May 1984. There is information about the Jiwarli spelling.

This story describes the origin of death in the world. Long ago it was customary that after three days those who had died would come to life again and then to ascend into the sky. In order to reduce the amount of distress for the next-of-kin of the deceased jilinbirrira Mudlark (Grallina cyanoleuca), also called Magpie-lark or Peewee, decided that once people died they should be buried in the ground and remain dead for ever. He painted himself with ashes and powdered gypsum, which is why he is black and white today. Aboriginal people still paint themselves with gypsum and ashes when they are in mourning.

In his comments, Jack Butler noted the striking correspondence between the three day period between death and rebirth in this story and the Christian belief that Jesus Christ was resurrected  after three days. 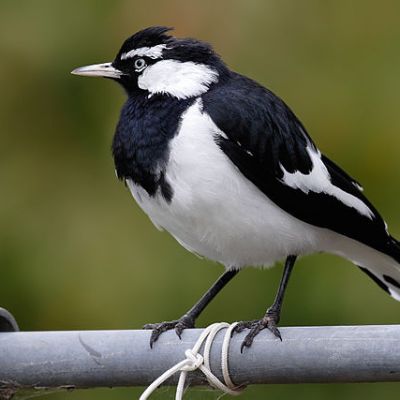