Today’s post presents the final traditional story in Jiwarli with English translation, told to me by Jack Butler on 19th May 1985 and explained on 20th May 1985. There is information about the Jiwarli spelling here.

This story deals with the southern neighbours of the Jiwarli and the Warriyangga, who are the Wajarri people. It describes a battle which is said to have taken place in ancestral times between the god Gardumayi and the Wajarri. At the end of the battle, after much loss of life, Gardumayi declared that Mount Augustus should be the boundary between the two groups and the Wajarri should not extend north of this border. Mt Augustus is located in the Mount Augustus National Park and is a highly visible monocline that stands 1,106 metres (3,629 ft) above sea level, and about 860 metres (2,820 ft) above the surrounding plain. It covers an area of 4,795 hectares (18.51 sq mi).

At the time of first white settlement, the Wajarri practised the male initiation rite of circumcision while their north-westerly neighbours, such as the Jiwarli, did not. Other cultural aspects differed between the two groups also — you can read more about the culture and society of the whole region here. 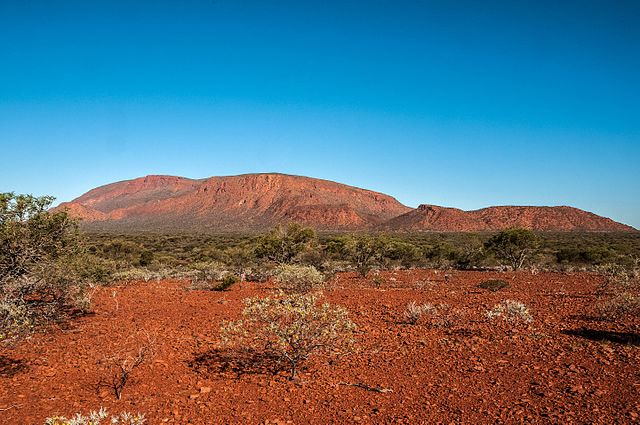 They fought one another there at the time of the ancestral beings, when the earth was soft. That was that god Gardumayi. There are now rocks there; rocks are standing up. They fought the Wajarri. people. Many Wajarri tried to come up here. Gartumayi said: “We will all fight one another.” So, they killed the Wajarri, and they are all lying in a heap as rocks today.